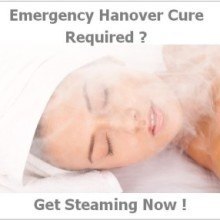 Now that we’re heading towards summer it’s pretty clear that our New Year’s resolutions haven’t worked and we can’t fool ourselves anymore. If we told ourselves that we were going to cut back on drinking but we’re still getting hangovers, then it’s clear 2014 is just another year of having fun and enjoying more booze and who knows what else? So what to do about the horrendous  hangover? How do I get through the weekend when I can’t get out of bed?

What’s the cure if a full English or a strong coffee doesn’t work? What if I try the “hair of the dog” and that only makes it worse? Well just hang on, there is a cure. It really is possible to just steam your hangover away. I know it sounds ridiculous but when you break it down and think about what is actually causing that pounding headache and the disorientation it does make perfect sense.

Drinking alcohol dehydrates your body due to the effects of ethanol. The next thing that goes wrong is that your liver is impaired and can’t produce the glucose your brain and body needs to function. The congeners that are produced in the fermentation process make all these symptoms even worse. It’s hard to believe but all of this can be relieved by a nice relaxing steam bath. This is the cure!

It really is true, first of all because a hot steam bath will cause your body to sweat and if you can sweat all the toxins out of your body this is major. Sweating is your body’s natural way to detox so if you sit in a steam shower unit for 15 to 20 minutes your pores will open and all the toxins accumulated from the night before will be released naturally. People say that a steam bath dehydrates you, but that’s easily handled by drinking a few glasses of water before you go in and again when you come out. The main thing is to get rid of all the unhealthy toxins and until you do, you’ll continue to feel hung over.

When you’re in a steam bath your muscles and tissues become warmer and this naturally releases any tension. Your mind can calm down and your whole body can just let go and relax. This is working in conjunction with your pores opening and allowing your body to sweat out and release all the toxins. There is no better cure for the hangover. To further drive home the point take a look at the Europeans or the Russians. They’re huge drinkers, especially the Russians. In fact Forbes ranks Russians among the world’s biggest drinkers. They love their vodka, we all know that!  In these countries steam rooms are used regularly to quell the effects of a night of drinking. They are preferred over all other methods for curing hangovers in Europe and in Russia.

The other countries famous for their love of drinking and partying would be the Scandinavian countries, specifically Denmark, Sweden and Finland. There are steam rooms available all over these countries for this exact purpose, getting everyone up and running after a night of drinking. So this is nothing new. It’s been a well-known remedy for hangovers for centuries. And we all know that natural cures are so much better for us than popping pills so leave the aspirin alone. It won’t work anyway. Jump into a steam shower unit for a nice relaxing steam and be toxin-free and ready for your day.

This is the perfect cure for healthy people who have tried a steam room in the past with no ill effects. It wouldn’t be recommended for someone having a pre-existing medical condition which could get worse by steam or heat. But for someone healthy who has that epic hangover, this is definitely a great option. This not to say we endorse heavy drinking and of course speak to your physician before you engage in any activity involving heat or steam.

Why not check out the new Insignia GT6000 Shower with Steam, which comes in black or white, not only a great cure for that hangover, but now with Bluetooth so you can listen some chill out music to unwind whilst you recover.