Relieve Stress and Tension With A Steam Shower 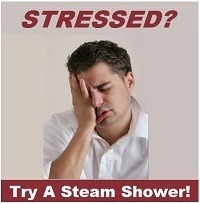 If you’ve ever used the steam room at your local gym after a tough exercise or sports match, you’re probably already aware of just how incredible it can feel—allowing your body to rest and relax, and quickly beginning to strip away those aches and pains you’ve got from such strenuous activity. Heat has long been known to be one of the best friends for anyone with sore muscles, achy joints and other general pains, which is quite obvious considering how many people use electric heating pads to take care of stress and stiffness.

While you can achieve these same results with either dry heat, such as that which a sauna provides, or moist heat like you’ll get from a steam room, many people can’t stand the much higher temperatures you’ll experience with dry heat. This is why steam rooms are so popular, and why many people are now turning towards installing steam showers in their bathrooms so that they can enjoy the benefits in the privacy of their own home.

Still, far from just helping to provide temporary relief from aches or pains and even the problems associated with rheumatism and arthritis, steam is also known to have a hugely relaxing effect on the body as well. Heat in general is known to help promote relaxation and relieve stress, and moist heat like that from a steam shower is far and away the most effective at this. This means that after a sitting in a steam room or shower for even just a few minutes, you’ll suddenly start to feel the stress and tension from your day melting away until it feels like you don’t have a care in the world.

Better still, although the steam will definitely help calm your nerves and relax your muscles, it also has a hugely beneficial effect on the mind as well. Moist heat is definitely a known pain reliever, but it is just as much an incredibly relaxant, having much the same effect on the body as having a beer or a glass of wine—only it’s all natural and doesn’t come with the same negatives associated with alcohol.

Furthermore, steam has been shown to have such a relaxing, calming effect that it has even been proven to help individuals suffering from terrible insomnia to finally be able to fall asleep without the need for prescription sleeping medications.

Simply put, there are few better things for you in life than being able to come home and enjoy a relaxing sit in your own steam room or steam shower cabin. This definitely explains why they are starting to become so popular, and considering that they actually cost almost the same as many standard shower cabins, it’s no wonder why so many people are finally beginning to catch on and enjoy the relaxing effects of steam in their own homes. So really, the only question left is why aren’t you one of them?